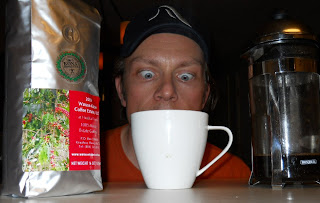 I love coffee. Seriously, I looooove coffee. Anyone who has ever worked in an office with me knows this first hand. I have seen the concern in their faces as I brew up another pot at 3:30 pm in the afternoon.
"We probably don't need a full pot," they warn.
"Yeah, I'm done," another co-worker quips.
"If I have a coffee this late in the day, I'll never get to sleep tonight."

What these people fail to realize when they first meet me, is that I don't expect any body to drink more coffee at 3:30 in the afternoon. I am brewing the coffee for myself. All of it. I have never had trouble sleeping after a good cup of joe. I routinely cap off my evening meal with a steaming cup of java, and sometimes have one right before bed. To me enjoying the smooth earthy taste of a warm cup of coffee is the perfect way to relax.


Now, I have never thought of myself as a coffee snob, but I do enjoy the variety of flavors and character of different roasts. I don't usually get caught up in analysis when I enjoy a cup, I simply know if I like it or not. And whether or not I like a particular cup of coffee has a lot to do with the situation in which I drink it. In general, I prefer darker roasts, but sometimes there is nothing better than a boiling hot vat of weak gas station coffee. And rarely is there anything that satisfies my sweet tooth more than an "Extra Large Regular" (The Great One) from Dunkin Donuts (it's like drinking melted coffee flavored ice cream).

Tonight, the cup in front of me is one of the best I have ever tasted. At risk of sounding horribly pretentious, it is 100% Kona Estate coffee from a single farm in Holualoa, Hawai'i. I didn't know much about "Kona" coffee before my visit to the Big Island, other than the fact that it is really expensive. Lucky for me, I stumbled upon a chance meeting with a coffee farmer named Dale Kabei at breakfast one morning in Hualalai. Dale is not your typical sales person. He's better than average, but not because he is trying to be.

When I met Dale, he almost seemed taken aback that I wanted to learn about his coffee. It was as if he was used to tourists rolling through the restaurant, hastly taking a sip of his coffee, and offering their opinion as if it was the Pepsi Challenge ("I like this one best"), and walking off. Once Dale and I got to talking, I learned that there are hundreds of coffee farms in the Kona region, and some roasters combined beans from various farms for their 100% Kona labled coffee. And often the combinations were inconsistent from batch to batch. Dale's coffee, Watson-Kabei, is labled "Estate" because all of the beans come from one farm, ensuring consistency and the highest quality. As Dale spoke about his livelihood, he became more comfortable and passionate. I could tell that he was no longer trying to "sell" me on tasting his coffee, he simply enjoyed talking with me about it. Our interaction had become a conversation, and before I knew it, I was on my second cup of his delectable brew.

Now, I have never paid more than $20 for a pound of coffee before, but after my interaction with Dale, I was certain that I would buy some of his beans. I asked how much they were, and he quoted $45 per lb. I told him that I would take two. $90 worth of coffee, bought on the spot. Sure the coffee tasted great, but I'll tell you what, I would never spend $90 on two pounds of coffee just because it tasted great. I spent $90 on the beans in large part because of my interaction with Dale, the anti-salesman. He wasn't pretentious. Never once did he "go for the close." Heck, I almost felt like he was reluctant to part with any of his precious beans. But it was his genuineness, and the conversation that we shared that made me need to take those beans home. Making that connection made all the difference.

To top it all off, when I arrived back home to Wyoming, I found an email in my inbox from Dale (I had signed up for his mailng list). It was a personal note, recollecting our conversation, and offering to ship coffee to my home when I ran out of what I bought in Hawai'i. This was most certainly a "sales" message, but it didn't feel like one, because of the context of our previous conversation. Probably without even knowing it, Farmer Dale pulled off one of the best sales techniques known to man. He connected with his customer first. The conversation proceeded the sale. And his simple follow up email has most certainly closed a future sale as well.